So we have been seeing a lot more of our customers getting bear spray to take with them on their outdoor adventures so I thought I would weigh on the subject and see if I can add any value. I am fortunately someone that has never had to use bear spray, but it is something that I have carried with me for years while in the outdoors. In this post I want to cover why it's important to have bear spray with you whenever you are in bear country and answer some of the more asked questions we get about bear spray. Then I want to cover some of the accessories that Counter Assault has come up with in order to make it easier to carry it.

Why it's a good idea to carry Bear Spray...

Bear spray quickly becoming a necessity for anyone that ever ventures out into bear country. Whether you're camping, hiking, hunting, or just out for a drive in the mountains, bear spray is a great way to be prepared in the event you need to have a method of defense against all large predators or potentially dangerous animals like wolves, cougars, moose, and obviously bears. The nice thing about bear spray is that you don't really need to aim. If you're on an early morning hike to your blind and not able to aim a handgun or a rifle, you just need to point it in the general direction and let the spray work from there. Another nice thing is that it doesn't do any lasting harm to the animals. Especially with limited animals like moose, they have been known to be aggressive, but they are definitely animals that we want to see more of so we need to do what we can to keep them around. For me, carrying bear spray is really all just about the peace of mind of knowing that I would be able to defend myself and those that I am with in case I need to.

Here are some answers to some of the more common questions.

How does it work?

Bear Spray is made from an an active ingredient called OC (Oleoresin Capsicum) which is derived from Hot Peppers. We're not talking Jalapenos though. These are probably peppers that were grown in the depths of hell and watered with molten lava. It is designed to give an immediate, but temporary burning sensation in order to scare bears away, but not harm them. If inhaled it will actually get into the lungs and cause some pretty bad burning which is temporary as well. The bear spray is pressurized in a canister in order to offer a shooting effect that can shoot up to 30 feet (8 Ounce Canister) to 32 feet (10 Ounce Canister) with up to 9 seconds worth of spray.

Counter Assault has developed a system that is extremely simple to use. Each canister comes labeled with easy instructions on how to use it. Once removed from the pouch, all you have to do is pull back the white colored safety mechanism (which is also glow-in-the-dark), point it in the direction you want it to, and push down the trigger lever. A couple of things to note are that there is a little bit of recoil as you push down on the lever so be ready for it. Also be aware that it is a spray so if it's a little windy outside, don't spray it into the wind to where it could potentially blow back your direction. Obviously, if the wind and a bear are both coming in your direction you'll have some choices to make. I would probably rather take a temporary shot of pepper spray to the face, rather than get mauled or killed. That's just me though. :) 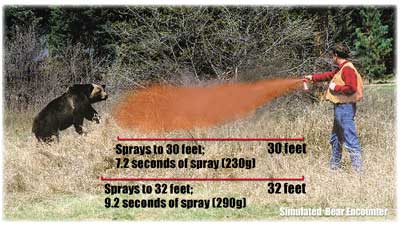 Does it really attract more bears?

So this question does make me chuckle a bit because of the reason they are asking it. The short answer is that there is no scientific testing that shows that it does or does not actually attract bears. The reason it's such a commonly asked questions is because of the intended use of the bear spray. No Joke! Some people have actually used it as a repellent spray meaning they literally sprayed down their tents and sleeping bags so that the bears wouldn't even come around. Bear Spray is intended to be a DIRECT CONTACT spray. It will not work unless it is airborne in a mist. By spraying down your tents and sleeping bags, it only makes your stuff smell horrible, and may actually attract a curious bear.

What do I do if I get sprayed?

This isn't as silly of a question as it sounds. Even though it would suck to no end, you really should be aware of what to do in the event you get sprayed directly or by blow-back. If you do get sprayed, the rule of thumb is rinse and call poison control if available. If you are in the backcountry and aren't able to call poison control, rinse thoroughly and have somebody closely monitor your condition. Everybody will react differently. If someone has a severe reaction, you may need to work out a quick exit plan. Getting sprayed is not lethal, but is definitely not an enjoyable experience. 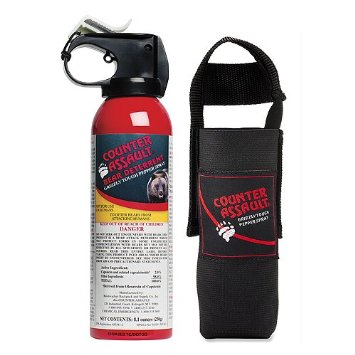 Every Counter Assault bear spray canister comes with a nylon holster that fits great on a waist belt or pack belt, and can be jury rigged onto shoulder straps or another location. A couple of other options for carrying the spray that CA offers are a 3-in-1 holster and a neoprene backpacker/cross draw holster. Both of these after market options could be a great setup for you, depending on your situation.

The 3-in-1 harness is nice because it's a full minimalist system. You don't need to hook it to a belt or anything else to secure it and it's really a light system. I was a little worried it wouldn't work along side my AGC bino pack, but it actually works great as you can see here:

The harness is also really adjustable. It cinches down really far for smaller people and expands out really far for the big guys. You can also adjust it to ride pretty much wherever you'd like; whether high, low, right, left, it will pretty much go where you want it to go. It's also removable so you can just use the swivel clip to hang it from your pack, or can act as a belt holster as well.

The neoprene case is really just taking the idea of having a belt holster and adding a lot of quality to it. You can have it as a horizontal belt holster, thread a shoulder strap from a backpack through it, or have it hang from your pack on a carabiner. The really nice thing about this is that it hugs the canister very well. Whether you have the 8 or 10 ounce, it sits really nicely in the pouch and really carries well.

The other product option that Counter Assault has that I won't really go into here is The Pentagon Electric Bear Fence. Which is exactly what it says. It's a portable electric fence to keep the bears out of your business. If you're floating or hiking into a heavily infested stretch of bear country, it's probably not a bad idea. For more info on it, you can obviously check it out on the product page.