I remember when my friend and hunting buddy first introduced me to the Havalon knife, my first exposure to a removable blade knife for skinning and field dressing game. It blew my mind, and aside from the razor sharp blade that scared me to death at first thought of changing out blades, I was sold! With time and a bit of practice, I found that I could remove the blade without too much trouble, but with laser focus as to not remove a finger. Perhaps you too had the same reaction.

Fast forward a few years and in 2013 Outdoor Edge dove right into the removable blade knife world by introducing the Razor-Blaze, a knife that was similar in some ways but that addressed some of the demands that hunters and outfitters had been asking for. 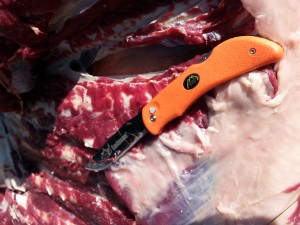 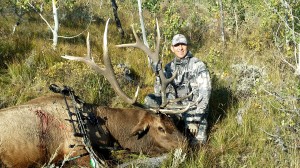 Some of those enhancements and features that stand out for the Outdoor Edge Razor-Blaze knife are:

What I found using this knife on two elk and a deer during the 2014 hunting season is that I really liked the feel of the handle and the durability of the knife in my hand. It felt and acted like a strong traditional folding knife with the advantage of a very sharp blade. I didn't think twice about the blade bending or even breaking which had happened to me before while caping a deer with the Havalon. There's not doubt that replacing the blade on this knife is so easy and safe, even my 8 year old daughter could do it without trouble. Additionally as the knife got wet from blood, it didn't move a bit in my hand and I was able to get the job done every time.

A couple of points of criticism would be that first off I was a little surprised that the blade seemed just a bit less sharp than the Havalon right off the bat, and it did dull a bit faster than its competitor. Secondly, at 3.7 ounces for the knife and an additional 2.4 ounces for the sheath, I felt that for an extended backpacking trip I would consider at least leaving the sheath behind from a weight savings standpoint.

Overall, the durability, ease of replacing the blade and the ability to sharpen the blade were all worthy trade offs that may likely offset my criticisms and keep me coming back to the Razor-Blaze for the 2015 season.